Allergies and blocked noses can start soon after birth. They are a response to tiny particles of dust in the air, and are becoming increasingly common in industrial countries. The most common allergy is to house dust. You can see how much there is when a shaft of sunlight crosses a bedroom.

If a newly born infant is exposed to high levels of dust their immature immune system may over react and they can become permanently sensitised, not only to the original agent but to other concurrent foreign proteins such as cows milk For instance children born at times of the year when the pollen count is high tend to have more hay fever. The consequences can be – blocked noses – mouth breathing – ear infections – crooked teeth – enlarged tonsils – enlarged adenoids – sinusitis – and later on unattractive faces.

Can allergies be avoided? NEVER LEAVE A NEW BORN IN A DUSTY ATMOUSPHERE. Attempting to remove dust by dusting or hoovering can be counter productive as it tends to stir it up. An electrical gadget called an ‘ionizer’ which generates an electric field, can help to lay bedroom dust and these can be coupled with a filter. Or one can adopt our grandparents habit of leaving a baby in fresh air for some hours each day. Alternatively you could go and live in the mountains or by the sea, where there is less dust/pollution and allergies are less frequent. The important thing is to realise in good time that blocked noses lead to open mouth postures and that these destroy faces.

Thumb sucking damages faces. Together with other finger, dummy and blanket sucking habits will, if severe enough distort the growth of the face and teeth. It is very important that babies and young children are discouraged at every opportunity as it can cause severe damage to both the face and teeth (see below). Don’t accept it as a passing phase, be gentle but firm. 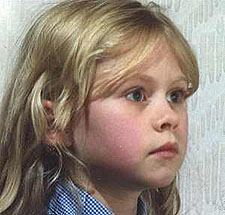 Aged 6 before she started sucking her thumb.

Aged 8 afterwards. Note the facial damage as well as the teeth.

Tonsils and adenoids can make it difficult for a child to breath through their nose. However we are not sure if they are the cause or the result of the mouth breathing. Either way, their removal will occasionally result in a dramatic spontaneous improvement in nose breathing, facial appearance, and self confidence.

Counselling. Every effort should be taken to encourage nose breathing. Place a paper clip or cocktail stick between the lips for long periods when doing home work or watching TV. Some dentists can provide an ‘Oral Screen’ which prevents a child mouth breathing during the night. Encourage them to eat hard food.

Treatment. Occasionally a simple appliance to widen the upper jaw will have the same effect as removing tonsils. This is because the nose is attached to the top jaw and widens with it, making it easier to breath. In more severe cases treatment should begin by the age of six. In mild cases an excellent result can be achieved in the teens or later. Unfortunately unless the child learns to keep their mouth closed, treatment will last a long time, and the problem will tend to return afterwards. If correct growth and oral posture can be achieved there can be a dramatic improvement in the appearance of the face and no extractions should be necessary.