Babies. Babies as young as three months strongly prefer attractive mums to unattractive mums (Samuels 1985). Attractive babies receive more affection and attention from there parents and other adults, and are more likely to grow up to be well balanced adults themselves.

Children. Children grow up to believe that heroes are good looking, heroines are beautiful, and bad people are ugly. These stereotypes remain with us all our lives.

Teenagers. Although they may not admit it, young teenagers are more concerned about their appearance than their relationships with their parents, their siblings, their friends, their work, or their pastimes. Handsome cadets achieve higher rank by the time they graduate (Ackerman 1990).

Criminals. A judge is more likely to give an attractive criminal a shorter sentence. Unattractive people are more likely to become criminals, four out of five females committed for aggressive offenses were rated as unattractive (Cavior 1974). Criminals who have their appearance improved by facial surgery are less likely to return to prison. (Lewison 1974) 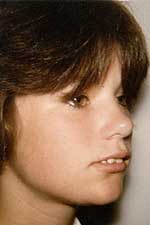 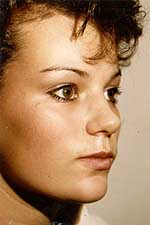 She was told she would need to have her jaws cut and repositioned, but was treated with orthotropics (growth guidance) instead.

Status. You will be considered to have higher status if your partner is good looking than if they are plain (Hartnett 1973).

Personality. Although many people claim to judge personality by the shape of a face, most studies have dismissed this possibility. However, one study (Squires and Mew 1981) of long and short faced people concluded that the former tended to be less conventional while the latter were more so.

Does Beauty Lie in the Eye of the Beholder? The answer is no, research has shown that we all tend to put peoples appearance into approximately the same rank order, regardless of their race, colour, or background. (Cross 1971). Recent research (Mew 1993) would suggest that while we generally agree about who is very good looking, opinions differ when we are considering the less good looking who populate the real world around us. In fact we tend to prefer people who look like ourselves.

Can orthodontic treatment change faces? While it is certainly possible to damage a face, most orthodontists do not believe it is possible improve the shape of the face with appliances. This may be true with traditional treatment but it does seem that Orthotropics can achieve changes in facial appearance, as well as oral posture.

An Introduction to Orthotropics